Book Review: Before The Dawn 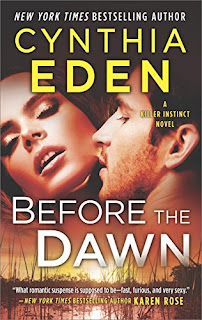 I was given this book for an honest review. Dawn Alexander is the only victim to have survived an attack by the serial killer known as the Iceman. Her boyfriend, Tucker Frost, was the one who saved her by killing the Iceman, who happened to be his own brother.

Seven years after the fact, they are brought together again when someone starts killing in New Orleans and the MO is that of the Iceman. Dawn is now a private investigator and Tucker is a top profiler with the FBI. Even though the body of Jason Frost was never found, Tucker assures Dawn that he is dead, while she swears she has seen Jason.

What follows is a race against time as more bodies start piling up while Dawn and Tucker try to reconnect despite the pain of their past. The characters are well written and the author does a great job of drawing you in to both Dawn and Tucker's feelings of being in each other's lives again since they never had closure when their relationship abruptly ended seven years before.

I was hooked from the first page and couldn't put it down. Ms. Eden kept me guessing as to who the killer was and when it's finally revealed I was blown away with the twist she put in. I give Before The Dawn 5 little birdies for being such an awesome read. I will definitely look for more books by Cynthia Eden.

The Killer Instinct series from New York Times bestselling author Cynthia Eden continues as an FBI profiler tracks a case that resurrects ghosts from his past
Ex-SEAL Tucker Frost knows that the world is full of evil. He saw it in the face of his own brother, Jason Frost, a cold, methodical, sadistic killer. A killer Tucker put down with his own hands in order to save Jason's final victim--Dawn Alexander, the only girl who got away from the infamous "Iceman."
It's Tucker's up close and personal experience with evil that's made him perfect for Samantha Dark's experimental profiling division in the FBI. And when women start turning up murdered with the same MO used by the Iceman, Tucker is sent back to Louisiana to investigate.
Seven years have passed since the night that Tucker faced down his brother...and since he last saw Dawn, his one-time lover. But as Tucker and Dawn grapple with a desire that never died, they must also face the shared shadow from their pasts. Both have the same question--has Jason Frost come back from the dead to hunt again? And this time, will he succeed in killing the victim who got away?

Property of Lark Riann Leigh at 2:11 AM