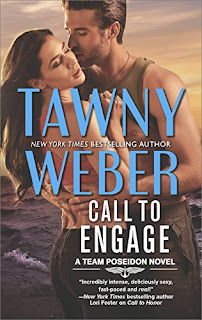 I received this book for an honest review.Elijah Prescott is a Navy SEAL who is recovering from an injury he suffered on his last mission. Despite being physically cleared to resume his duties, he feels that maybe he's not mentally ready and takes some time off to sort his life out. He heads back home to stay with his cousin, who owns a gym, and runs into his ex-wife.Ava Prescott has turned her life around from what it was when she was married to Elijah. She teaches numerous classes at the gym and with the discipline she's learned to get her body in shape, she's buried the pain of her failed marriage.Proximity, as well as the rekindling of their physical relationship, makes Elijah and Ava do some soul searching in regards to their marriage, one of them being that Ava never really accepted his chosen career. When she's pulled into an ongoing mission with Elijah's team to ferret out a traitor, she finally learns to accept him for who he is.Call to Engage will pull the emotions out of you while keeping you turning the pages. There's action, intrigue, love, humor, and heartbreak. If you like your heroes to be strong Alphas and their women strong enough to handle them, you're going to definitely want to read this book.

I give Call to Engage 5 little birdies for a superior read. Tawny Weber is an author who knows her stuff when it comes to military books and it shows.

The Poseidon team are hard-bodied, fiercely competitive Navy SEALs. But when a sensitive mission goes disastrously wrong, three of the team's finest will have to trust their hearts and instincts to uncover the truth…
Lieutenant Elijah Prescott should be spending his precious leave somewhere with sun, surf and scantily clad women. Instead, he's heading home with two goals in mind. Figure out exactly how his last assignment went to hell and almost killed him—and reconnect with the woman who might offer salvation.
Ava Monroe has streamlined her life, eliminating every source of pain—including a marriage touched by tragedy. One glimpse of her ex and those good intentions turn to bad-girl desires. Her strategy: get over Elijah by getting under him again, sating herself until she can finally let go. But as betrayal within the rank of the SEALs turns deadly, there's no denying that her heart and her life are on the line. Elijah is the only man who can protect both…

Property of Lark Riann Leigh at 12:00 AM