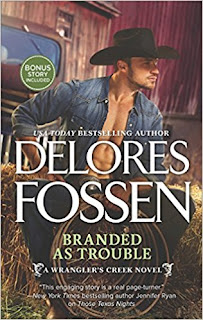 I received this book for an honest review. It's been awhile since I have read a Western romance, yet despite that I liked this book.

Roman Granger returns home when he feels that his teenage son is following in his bad boys ways.  Roman is also hoping that he can reconnect with his son as he has been gone more often than not because of his business. Add to his problems, Mila Banchini. There's always been an attraction there, but he's refused to act on it because she's his sister's best friend and a virgin. Too sweet for someone like him.

What follows is funny (the hospital scene with Roman and his mother coming up with code words for time to change the subject), romance, heartbreak, redemption, and forgiveness. Note that there is a suicide attempt, but the author handles it, along with the healing, with grace and intelligence.

I highly recommend this book and give it 4 1/2 little birdies for an awesome read.

Every town needs a bad boy, and Wrangler's Creek's has been gone far too long…
Getting his high school girlfriend pregnant was just one square in Roman Granger's checkered past, but it changed him forever. When his son's mother skipped town after the birth, Roman decided to do the same, baby Tate in tow, hoping for a fresh start.
Now Roman fears his teenage son is following in his wayward footsteps, so he returns home to Wrangler's Creek, aiming to set him straight. It's there he encounters Tate's cousin Mila Banchini, the good-girl opposite of Roman who's had a crush on him since childhood. The old spark between them undeniably never died, though Roman worries it'll only lead to heartache. But if falling for Mila is such a bad idea, why does everything about holding her feel so right?

Property of Lark Riann Leigh at 12:21 AM