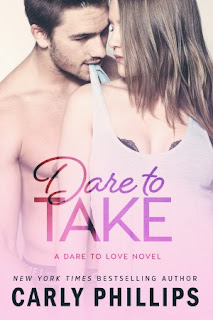 Dare to Take is the 6th (and what appears to be the last) book in Carly Phillips’s Dare to Love series. I was a little nervous that I would be missing important pieces to the story since I have not read any of the other books in this series, but I was pleasantly surprised to find that it reads well as a stand-alone. Ella and Tyler’s story is one of second chances.  He is the cliché older brother of her best friend, and Ella has always had a crush on him until the one and only night they spent together years ago after which he broke her heart. Now Tyler is there to rescue her, at his sister’s request, and he and Ella have a second chance at love. It’s a cute story, short and sweet, but there were elements that just felt shallow to me.

While predictable and cliché, I do believe that this story did have some major potential. Unfortunately it didn’t live up to that potential for me. The characters lacked depth and the events moved too quickly in my opinion. It was very hard for me to believe that the past encounter between Tyler and Ella was really so bad that it caused her to have issues with self-image. The inner dialogue from them gave the impression that they were two damaged souls, lacking trust due to events in their childhood. But the descriptions of these events were skimmed over pretty hastily and lacked the grit for their trauma to be believable. I would like to think that they were given more attention in previous books in the series and this is just a downfall to reading the book as a stand-alone, but unfortunately it didn’t inspire enough interest for me to want to go back and read the previous books in the story.

Overall, Dare to Take is a pretty good book. If you are looking for a light love story that’s short and sweet, you’ll probably enjoy this one. While it didn’t keep me up at night reading, I did enjoy coming back to it to see how the adventures of Ella and Tyler would play out.

She was off limits, But he couldn't resist. There are just some guys you don't touch--even someone as innocent and inexperienced as Ella Shaw knows that. But when her brother's best friend is up for grabs and willing, she can't resist. After all, she's wanted him for years... On leave from the army, Tyler Dare is just looking for a little fun, but his best friend's sister is off limits. Yet unable to deny how sexy and alluring she is, he finds it all too easy to succumb to a night of passion and heat that ends the next morning in the worst way possible. Now, Ella is stranded on a tropical island with a hurricane bearing down, and only Tyler can save her. It's his chance to make amends for the past and show the woman he's never forgotten that he's coming after her . . . in more ways than one.
Property of Lark Unknown at 7:00 AM