Reading Lark After Dark would like to welcome author, Tracey Sinclair, to the Dark Nest today. 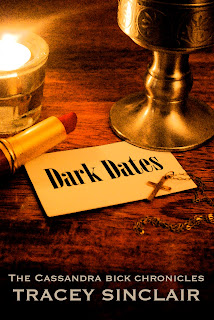 After Dark: When and why did you begin writing?

Tracey: I’ve written ever since I was a child – I remember being about 10 or 11 and having a huge cardboard box full of notebooks where I kept my stories, so it’s been a passion since I was young – I can’t remember when I started, just that it’s always been something I’ve loved. My first short story was published in a magazine when I was 17, and since then I’ve had a steady stream of work published in magazines and anthologies. My first novel, Doll, came out in 2005.

After Dark: What inspired this story?

Tracey: I actually wrote a short story to cheer up a vampire-loving friend – I wanted to write something that was fun and contemporary and set in London, where I live, and peopled by characters I liked and could relate to. Then I sort of fell in love with those characters and couldn’t stop writing about them! I also wanted to write something based in the area I was working in at the time – Smithfield, which houses a beautiful old meat market in a setting that dates back centuries (it’s where William Wallace, the hero of the film Braveheart, was executed and used to have a giant plague pit, so it’s got a colourful history!). It’s such an inspiring setting, I felt I had to use it.

After Dark: Which of your characters are you most like?

Tracey: I’m actually very like Cassandra Bick, the heroine of Dark Dates – not as tough, obviously, probably not as brave and tragically without the smoking hot love interests, but other than that we have a lot in common: we’re a bit geeky, a bit snarky, not very domesticated, and not particularly fit. The resemblance is deliberate – I didn’t want to write about someone who was like Buffy (much as I love Buffy), with lots of powers or a super fit body. I wanted to create a character who you could imagine cracking open a bottle of wine with!


After Dark: Why did you choose to write in this genre?

Tracey: I love urban fantasy – especially authors like Kelley Armstrong and Jim Butcher – but I struggled to find a series that had the type of characters I could relate to: there seemed to be too little between the Bella Swan swooning teen at one end of the scale and the Anita Blake kick-ass babe at the other; I wanted to write a book I’d like to read, with characters who are smart and funny and sexy, and set in a world I could recognise – just with added vampires!

After Dark: Can you share a little bit about your next project with us?

Tracey: It’s the follow up to Dark Dates - although the Dark Dates is a standalone story, it does set up a sequel and so I’m excited to be working on that.

After Dark: Who is your dream book boyfriend?

Tracey: Is it too tragic to say my own characters? I did write what I was attracted to, so I suppose it shouldn’t be a surprise that I’m completely in love with both Cain and Laclos – and the sequel gets steamier, so as I’m writing it I’m becoming even more smitten! Outside of my own work, I love Harry Dresden, with his old-fashioned sense of chivalry, though as things never seem to work out for him, it’s probably no fun to be his girlfriend. I also love Sam Vimes from the Discworld, and his relationship with his wife Sybil – it’s one of those genuine, loving but utterly realistic marriages that I would be very happy with. But I do develop crushes on male characters all of the time – I love a lot of the boyfriends /partners in the Kelley Armstrong books, for example, I’d happily settle for any of them!

Pick One:
- Coke or Pepsi? Diet Coke. But my favourite is the Scottish drink Irn Bru!
- Hot or Cold? I’m a wimp and don’t cope well with either, but at a push, cold.
- Boxers or Briefs? A nicely fitted pair of briefs. But not teeny ones!
- Vampires or Werewolves? Vampires. Unless it’s Alcide from True Blood… I’d definitely make an exception for him!
- Night Owl or Early Bird? Night owl, though I do often wake up ridiculously early, get a lot of stuff done then go back to bed! Tracey Sinclair works as freelance copywriter, editor and legal directories consultant. A diverse and slightly wandering career has included writing factsheets for small businesses, creating web content for law firms, subtitling film and TV and editing one of the UK’s largest legal directories. A keen blogger, she regularly writes for online theatre site Exeunt and science fiction site Unleash the Fanboy and her blog Body of a Geek Goddess was shortlisted in the Cosmopolitan Blogger Awards 2011. Her work has been published in a number of magazines and anthologies and her short play Bystanders was premiered in 2011 as part of the CP Players New Writing Season at Baron’s Court Theatre, London. She has published two small press books (Doll and No Love is This, both Kennedy & Boyd) and is now dipping a toe in the digital self-publishing world with her new urban fantasy novel, Dark Dates.
Property of Lark Lark Andrea at 7:00 AM